Bringing Interski to the Australian ski slopes in 2019

In March 2019, I attended Interski in Pamporovo Bulgaria as an official APSI delegate. It was my first opportunity to attend this international congress of Snowsports Instructors which occurs every 4 years in a different world location. I felt it was the right timing to attend Interski, in terms of the knowledge and skills I possess enabling me to understand, critically analyse and maximise the ability to take away valuable new skills and concepts to use in my own coaching and teaching. I also knew every member of the Australian Demonstration Team, including most of the supporters attending and wanted to support the Australian Team show case their skills to the International Snowsport Industry.

After a busy season teaching in Hokkaido Japan, a colleague and I organised our flights to connect with the Australian team in Doha, even after a long flight there was already a buzz of excitement in the air as we said g’day to friends we hadn’t seen since October the previous year. None of us had been to Bulgaria before, so had no idea what to expect when we arrived. The four-hour bus transfer from Sofia airport to Pamporovo gave us our first networking opportunity, we shared the bus with Demo Team San Marino, it was so much fun, practicing Italian with them and by the end of the journey the entire bus was Karoke singing Italian and Aussie songs. After an almost forty-hour journey we arrived at our hotel poised and ready to take on whatever Interski had to offer us. Our first impressions were of the hotel dining room where a buffet laden with cucumbers was served in a room draped in wedding style satin over tables, chairs and windows…. we knew then it was going to be an interesting week ahead. 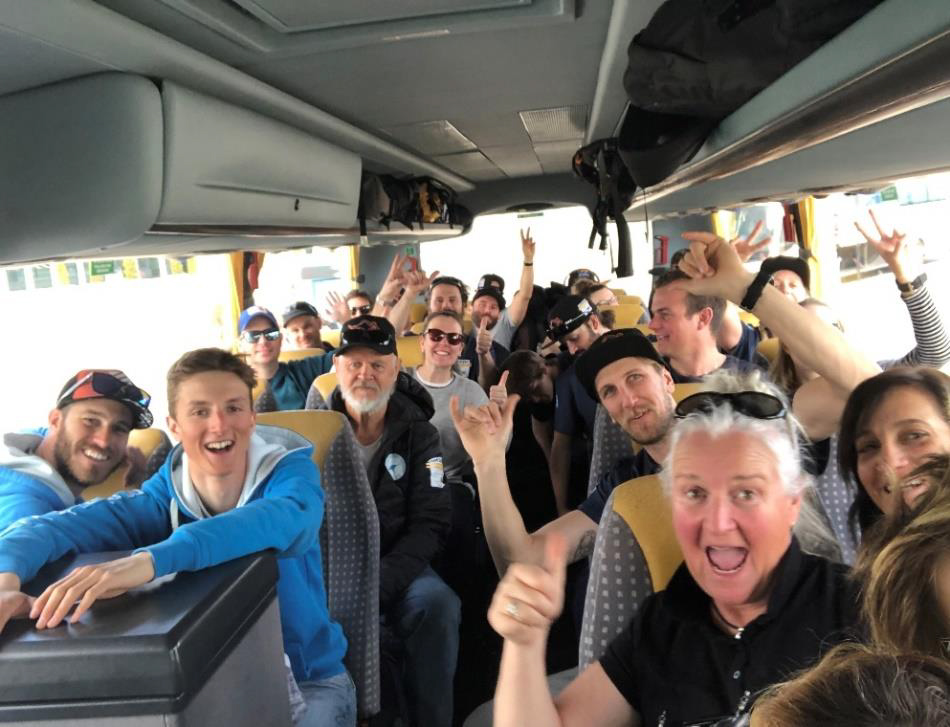 The first day consisted of a relaxing ski with some of the other supporters, participating in the opening march of the 36 countries who attended, watching the opening teams synchronised skiing and going to the official opening party that evening. Being one of the few APSI trainer/examiner team supporters without any official duties, I was able to relax and absorb Interski differently to the Demo team members or family supporters. I chose which on-snow workshops or off-snow lectures which interested me the most and was able to participate in all the social functions.

It was a hectic schedule of two, 2.5 hour on-snow workshops a day, two off-snow lectures, dinner back at the hotel with the team every evening and then a social function every night. On-snow I attended the British, Austrian, Swiss, Norwegian, Canadian, New Zealand, Danish, USA and Australian workshops. The lectures I attended were the British, Norwegian, Czech, Canadian, Danish and Australian. Every workshop and lecture delivered valuable information to my role as a coach and teacher of skiing, however two very interesting themes stood out for me. Switzerland and Austria, stood out in the technical demonstration, though the countries who excelled at delivering technical knowledge had something extra which I hope to utilise in my own teaching in future. 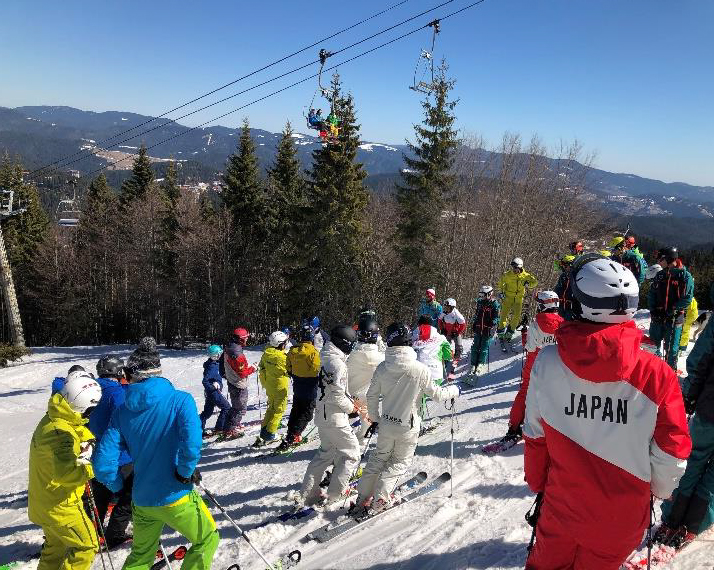 Canada impressed me, in the on-snow workshop I had the privilege to ski with JF Beaulieu, his presentation method and explanations were so clear that there was an immediate improvement in everyone’s skiing and considering most of the attendees were already at an elite level this was outstanding. The technical concepts JF delivered were inspiring, encompassing biomechanical body movements in relation to physical forces in skiing and how the interaction between the two result in different performance of when in the turn the skier accelerates affecting the turn shape and flow. I will endeavour to encompass JF’s ideas into my own teaching this up-coming winter. The Canadian off-snow lecture was based around how they create lifelong Snowsport enthusiasts through utilising a decision-making model and by building learning contracts with guests. Both the New Zealand and the British discussed their models which they use as frameworks to structure and deliver high quality lessons, these models had similarities to our Australian system. 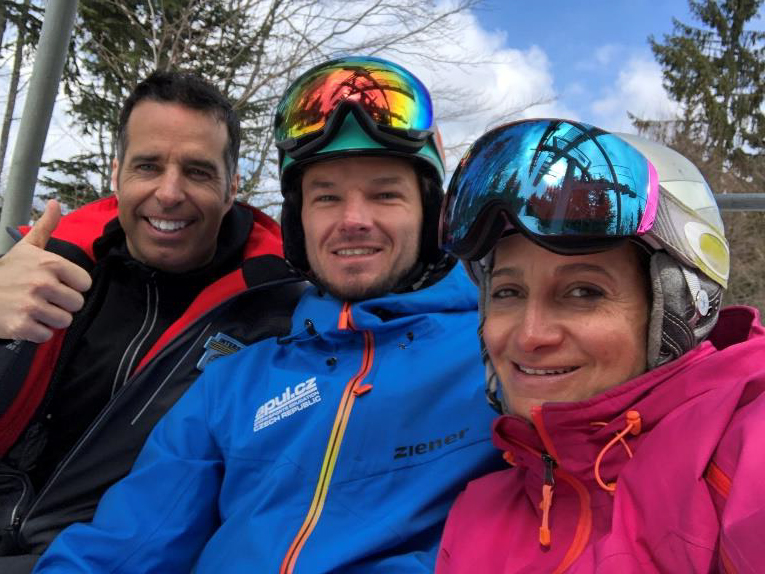 Two other countries workshops and lectures stood out for different reasons. Both Denmark and Norway had included the use of professional neuroscience research into their teaching philosophies. Denmark named their concept “Passion breeds Passion” where they believe joyful learning reduces anxiety leading to accelerated learning environments. In the workshop this was facilitated by encompassing group engagement at the beginning in a team bonding exercise to help the individuals within the group to work together with the instructor on tasks. It was an interesting and receptive environment to experience and gave me valuable insights into creating comfortable learning environments. 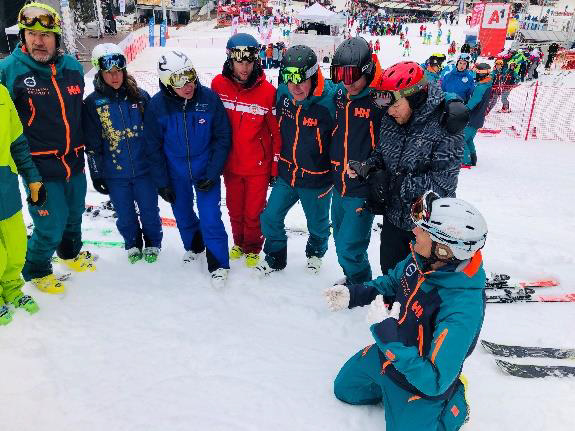 Norway also developed part of their presentation and teaching concepts in Snowsports from a background of how they teach academic medical science. The Norwegians analysed how students have gone through an evolution in the last two decades with the access to modern technologies which has created very different learners and how this affects the ways in which learners gather, analyse and utilise information in order to learn new skills. To adapt to this the teacher needs to become more of a facilitator and they have developed a practical model to use to create this learning experience called Team Based Learning (TBL). On snow we had a very real experience of TBL where they grouped us randomly into groups of 7 people; with different skills, experience and international backgrounds. Several tasks were given to us and we were sent away for two hours to work together to come up with two mutually agreed answers. It was challenging to work in such and environment, but at the same time a new and exhilarating experience. I will be including small amounts of TBL into my teaching in future since I think it is a valuable way for everyone to learn from each other, enriching and maximising learning beyond the traditional teacher-learner two-way approach.

Overall Interski was a valuable experience and a huge highlight professionally of my year, I met many wonderful people in the Snowsports Industry including being reunited with my old race coach from childhood. The next Interski is in Levi Finland in four years and I hope I will be able to attend it to reunite with some of the people I met in Bulgaria and to learn more as a coach and instructor.